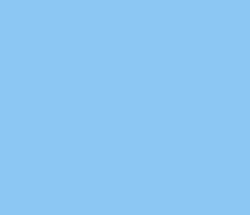 Check the contrast of #8cc7f2 [Jordy Blue] color design for accessibility base on Web Content Accessibility Guideline (WCAG). Use this color contrast checker to determine whether or not your color combinations are accessible or not. An online tool to check and adjust contrast levels between text and background colours to help meet accessibility guidelines. Design with accessibility in mind.

In color theory, a color scheme is the choice of colors used in design. They are colors that are next to each other on the color wheel. Analogous colors tend to look pleasant together, because they are closely related. The triadic color harmony groups three colors that are evenly spaced from another and form a triangle on the color wheel. Split-complementary colors differ from the complementary color scheme. The scheme consists of three colors, the original color and two neighbours of the complement color.

Below, you can see some colors close to hex color #8cc7f2. Having a set of related colors can be useful if you need an inspirational alternative to your original color choice.

A shade is achieved by adding black to any pure hue, while a tint is created by mixing white to any pure color. #1e5984 is the darkest color, while #ffffff is the lightest one. Shade and tint color variations of #8cc7f2.

Enjoy $29 off on your first stay at travels. Claim your 29 USD AirBNB free credit by clicking here!!

Here's a color conversion chart. It contains technical information about the hex color #8cc7f2. If you're a programmer, view the code snippets section for prepared language syntax.

A selection of SVG images/icons using the hex version #8cc7f2 of the current color. If you're considering using #8cc7f2 in a logo or design, you can quickly reference below to see how various symbols, icons, and emblems look.

If you correct your mind, the rest of your life will fall into place.
“Lao Tzu”

A color gradient may also be known as color progression or a color ramp. A gradient is the gradual transition of one color into another. This section showcases gradients featuring #8cc7f2 as the base color. The secondary colors come from the section above.